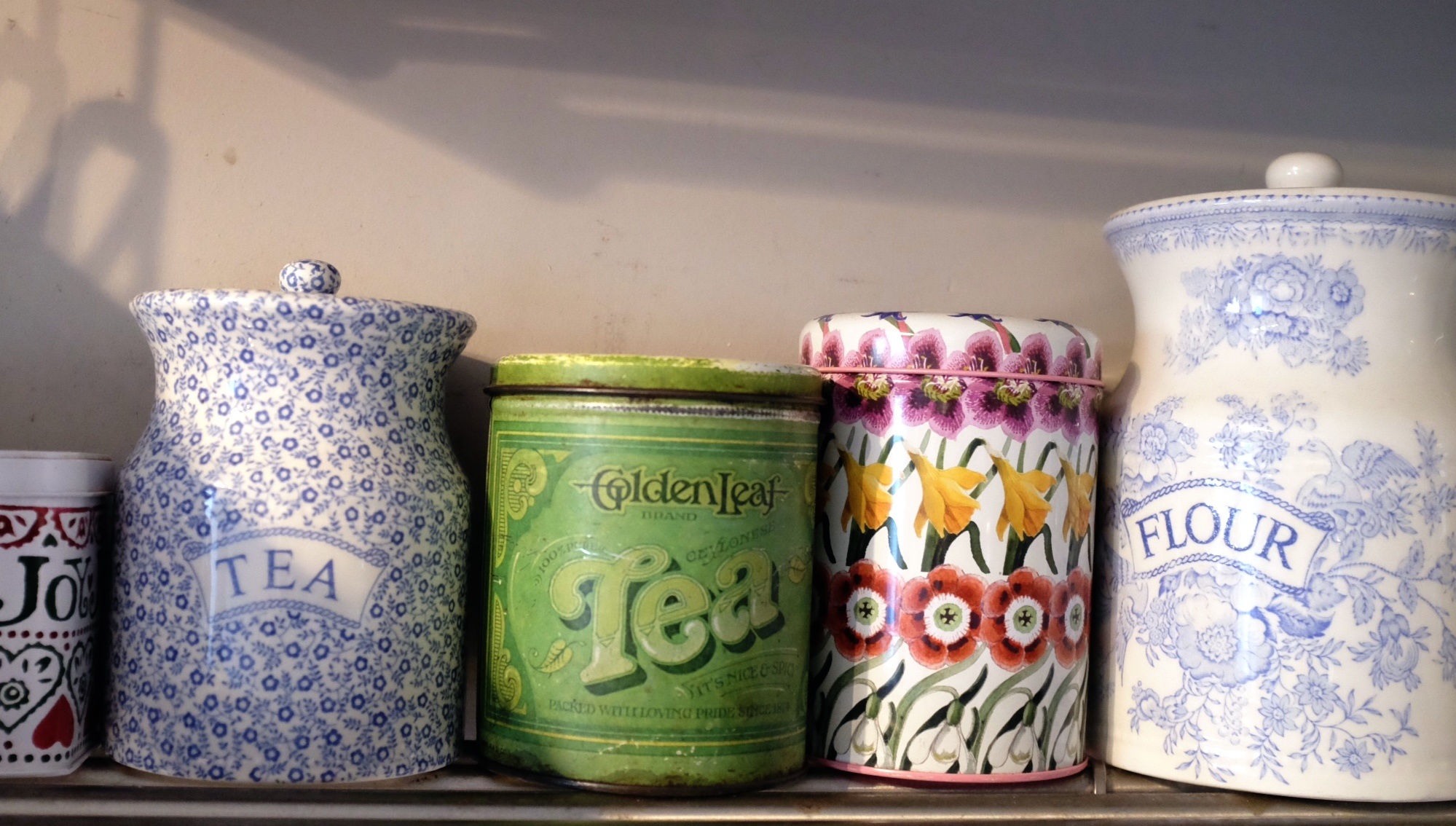 We have recently updated our kitchen and so this seems the perfect time for my first room tour! Before we start, here’s a little background story…

We moved into our Edwardian house four years ago. One of the things we really fell in love with was the spacious kitchen and we just plonked ourselves in and lived with everything for a few years. But by last summer the kitchen was beginning to look very tired and things were starting to break. The cheap plastic coating on the Ikea cupboard doors was starting to peel off and the taps had an unfixable drip that drove us all mad. Then the dishwasher conked out. We tried to mend it, but it was beyond hope. The oven, too, was on its last legs.

Soon after we’d moved in, I’d sussed out that buying new cupboard doors from Ikea would be a cheap and convenient option for us when the time was right. Unfortunately 2014 was the year that Ikea decided to radically change their entire range of kitchens. After a bit of panicking, Ikea reassured us that they would still be selling replacement doors for their old kitchen carcasses for another two years.

I won’t bore you with the full details, but let’s just say we ordered everything in early summer 2014 and we finally received everything in February this year – just when we’d almost given up hope of ever finishing. Doing this sort of facelift, rather than a full re-fit was very fiddly and difficult. But, now, it’s finally finished. The worktop is still a bit worn and decaying in places, but it’ll do for now (at least until the old hob breaks!). The whole room feels a bit more ‘us’ now. It’s not normally this tidy, by the way. Far from it!

So, grab a cup of tea and come for a look round our finished room.. 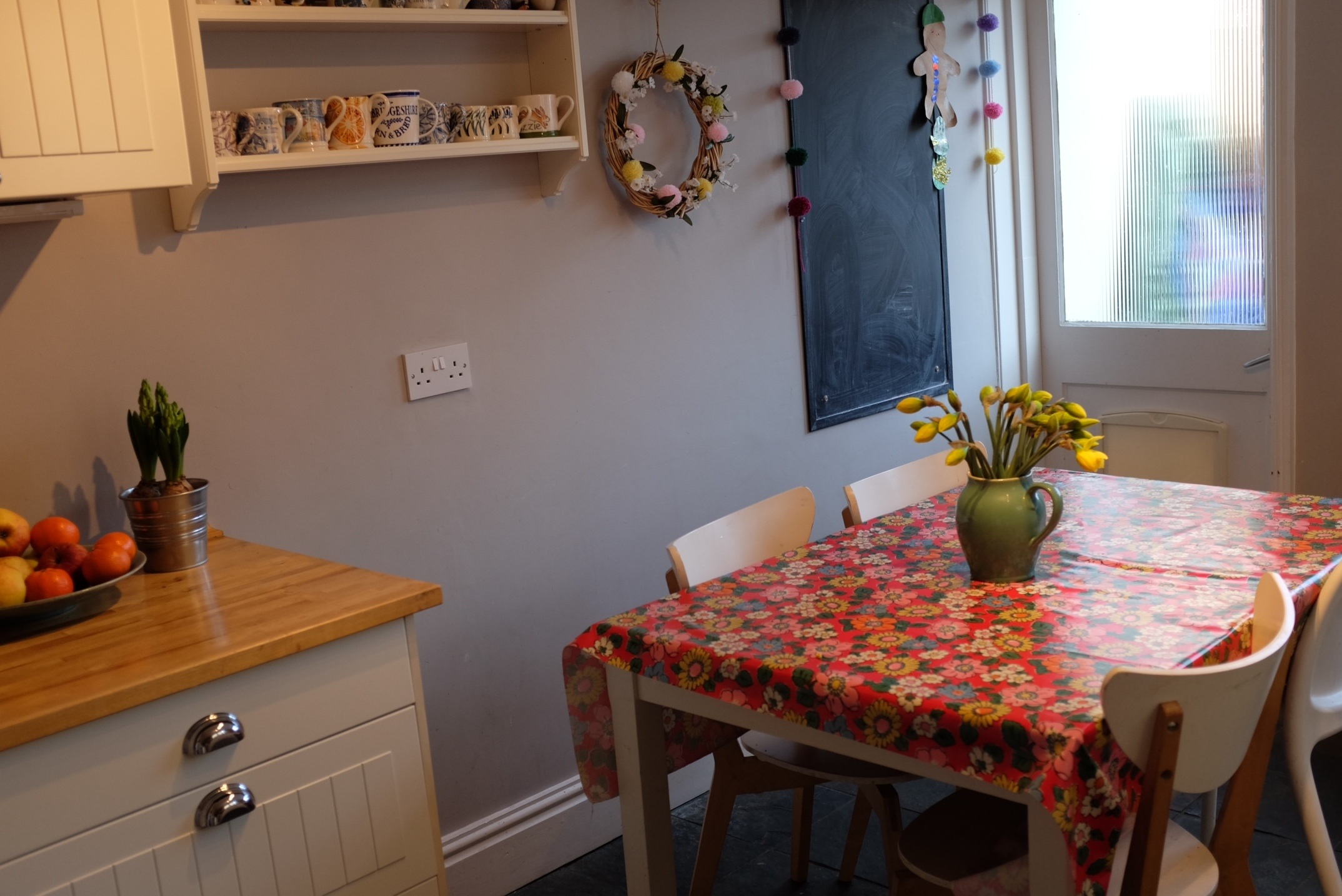 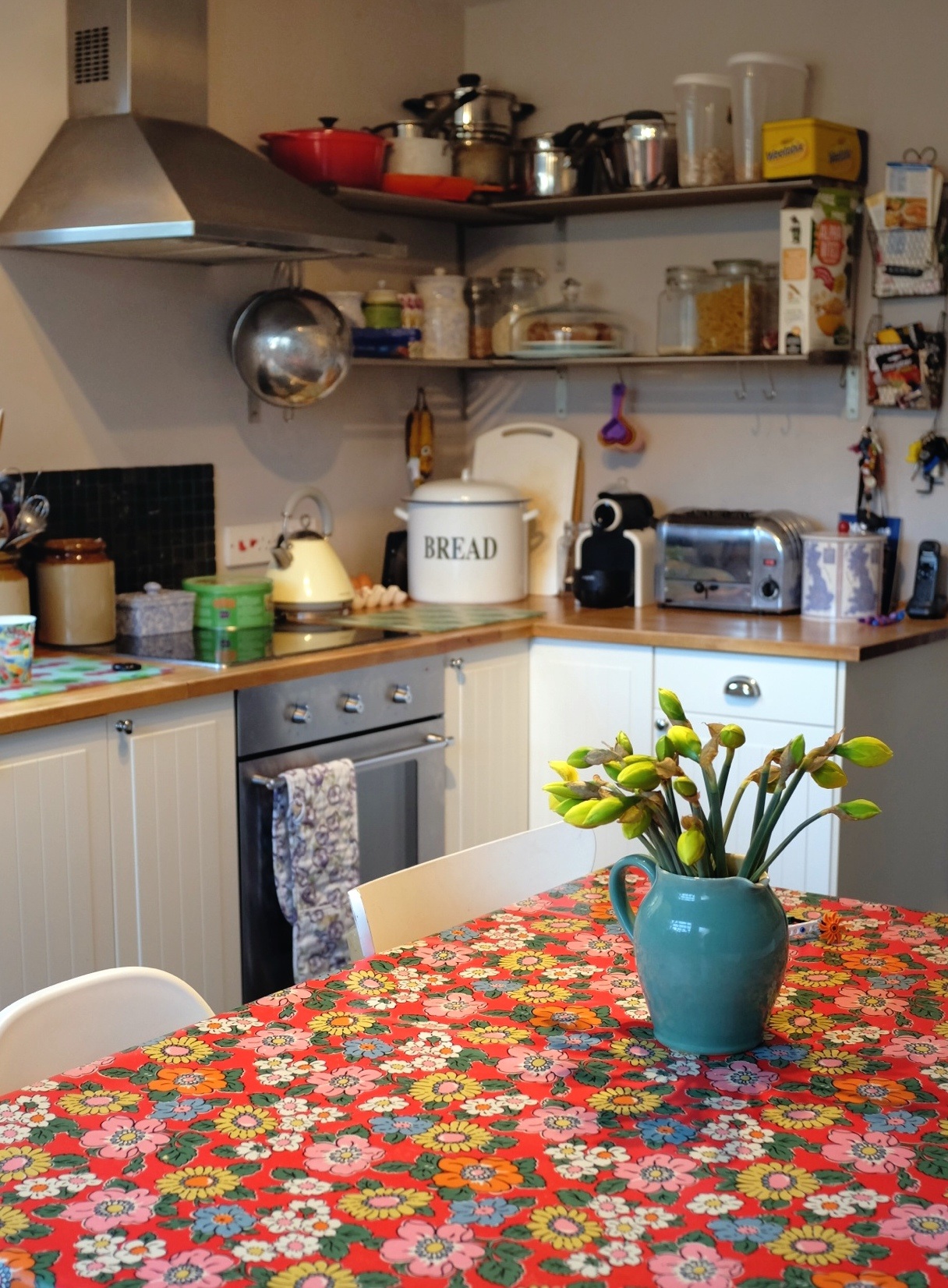 I always like to have an oilcloth covering the kitchen table. This is a practical and fun way to add a bit of colour to your room. The current one is from Cath Kidston, which I bought half price in the sale last Autumn. 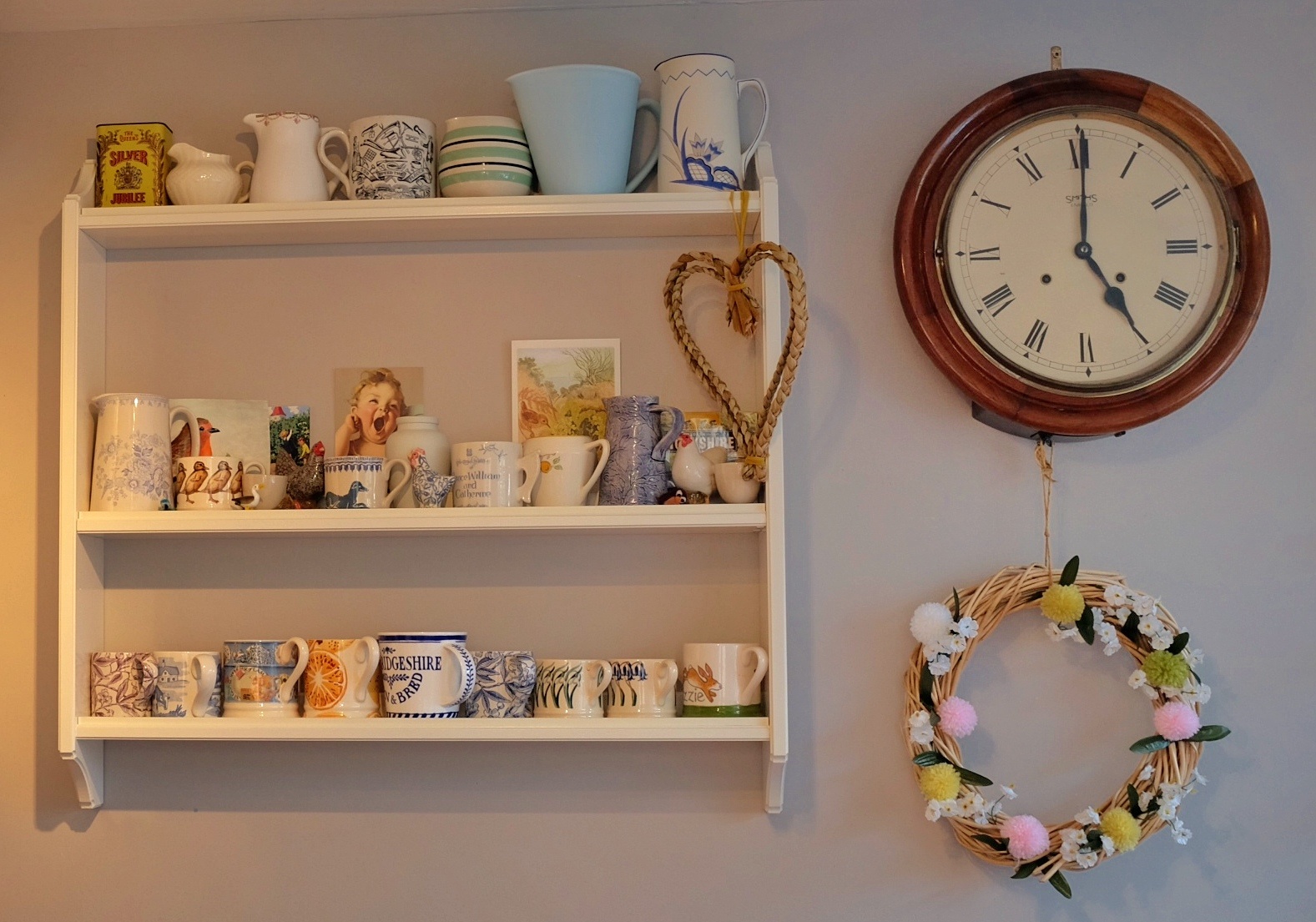 We bought this little shelving unit from Ikea at the same time as our new cupboard fronts. I’ve finally got somewhere nice to display some of my pretty treasures, which have been hidden behind cupboard doors for years. This clock was one of the first things James and I bought together when we had our first flat in London. When we remember to wind it up it has a very soothing tick, and strikes the hour. 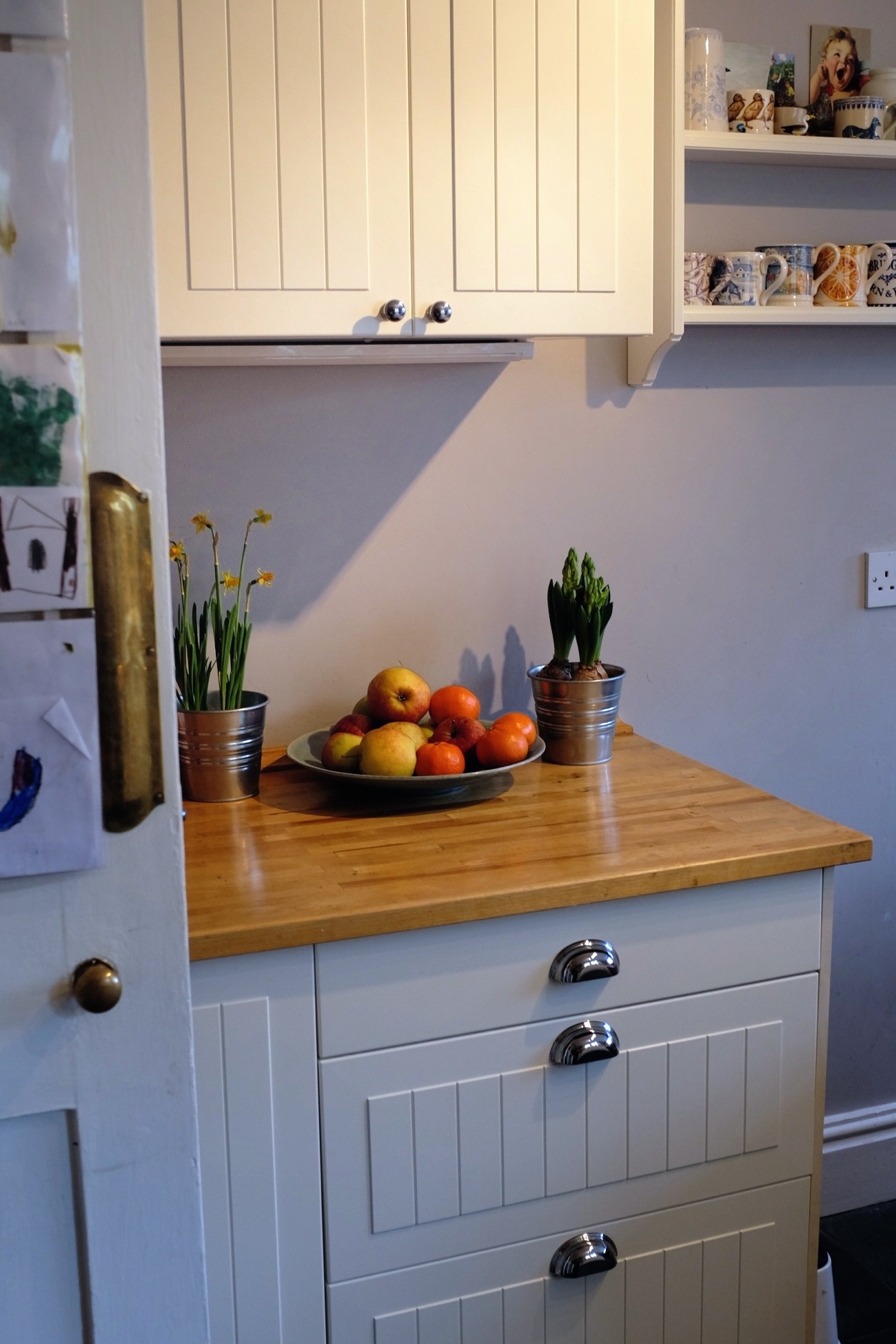 This fruit bowl is another treasured possession – a present from James from the Conran Shop. 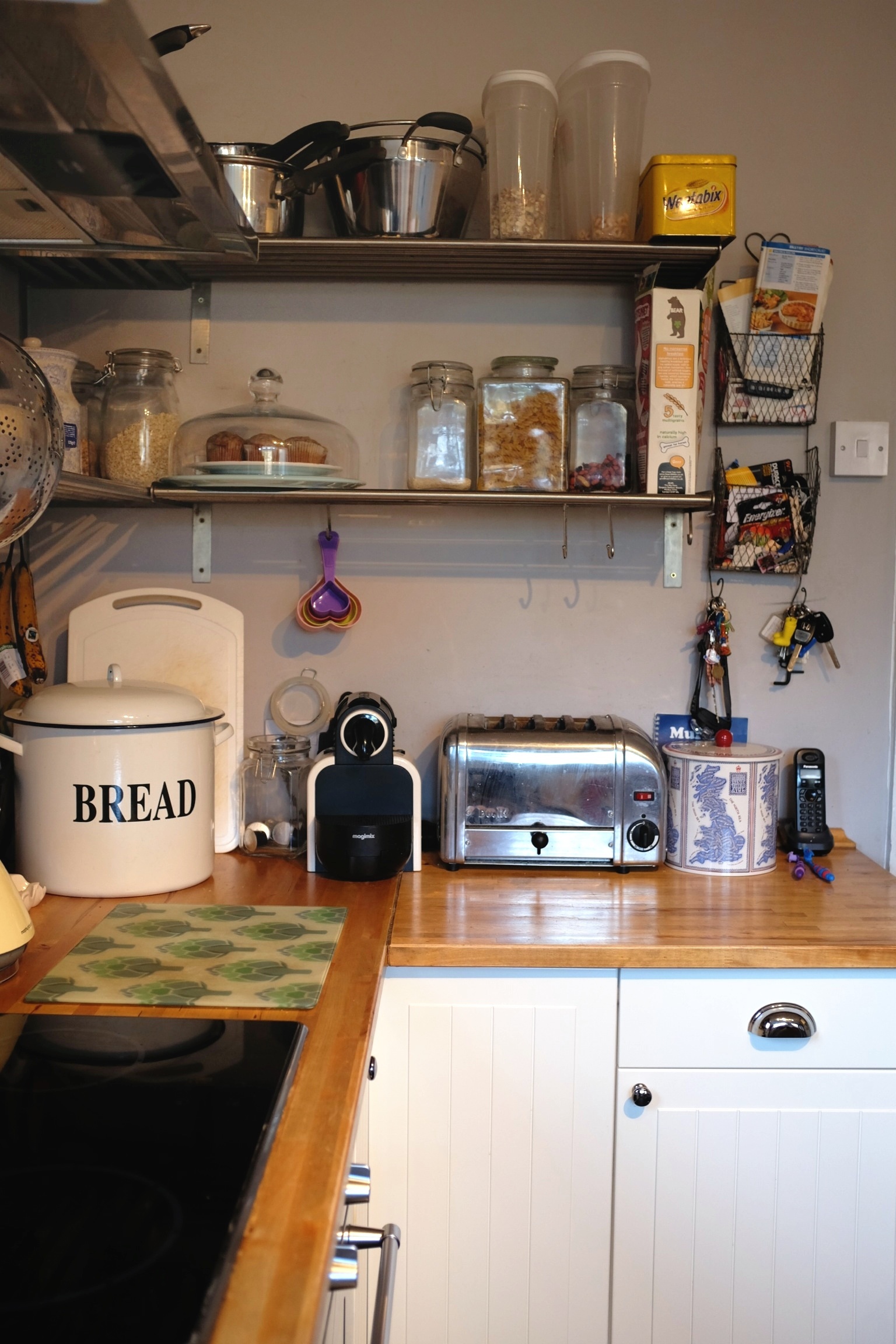 Here are a few of our trusty appliances. My parents bought us our Dualit toaster when we bought our first home together in 2006. We bought this Nespresso machine, by Magimix, a couple of years ago. It’s become our must-have gadget, and I couldn’t live without my lovely morning coffee while Tom’s at nursery. Another treasure is my Nigella Lawson cake stand – a birthday present from my sister years ago. I’m not a big fan of these metal shelves – they’re not really my style. Hopefully we’ll replace them one day for some wooden ones. You can also see our glass halogen hob. I was deeply suspicious of this when we moved in, as I’d always preferred gas, but now I’m a total convert! If you cook things on the lowest setting, they never burn or stick. I’m just dreading it breaking sometime soon as it’s of the same vintage as the old oven and dishwasher. Hopefully if, and when, it does break we’ll be able to get another to fit the opening easily enough… 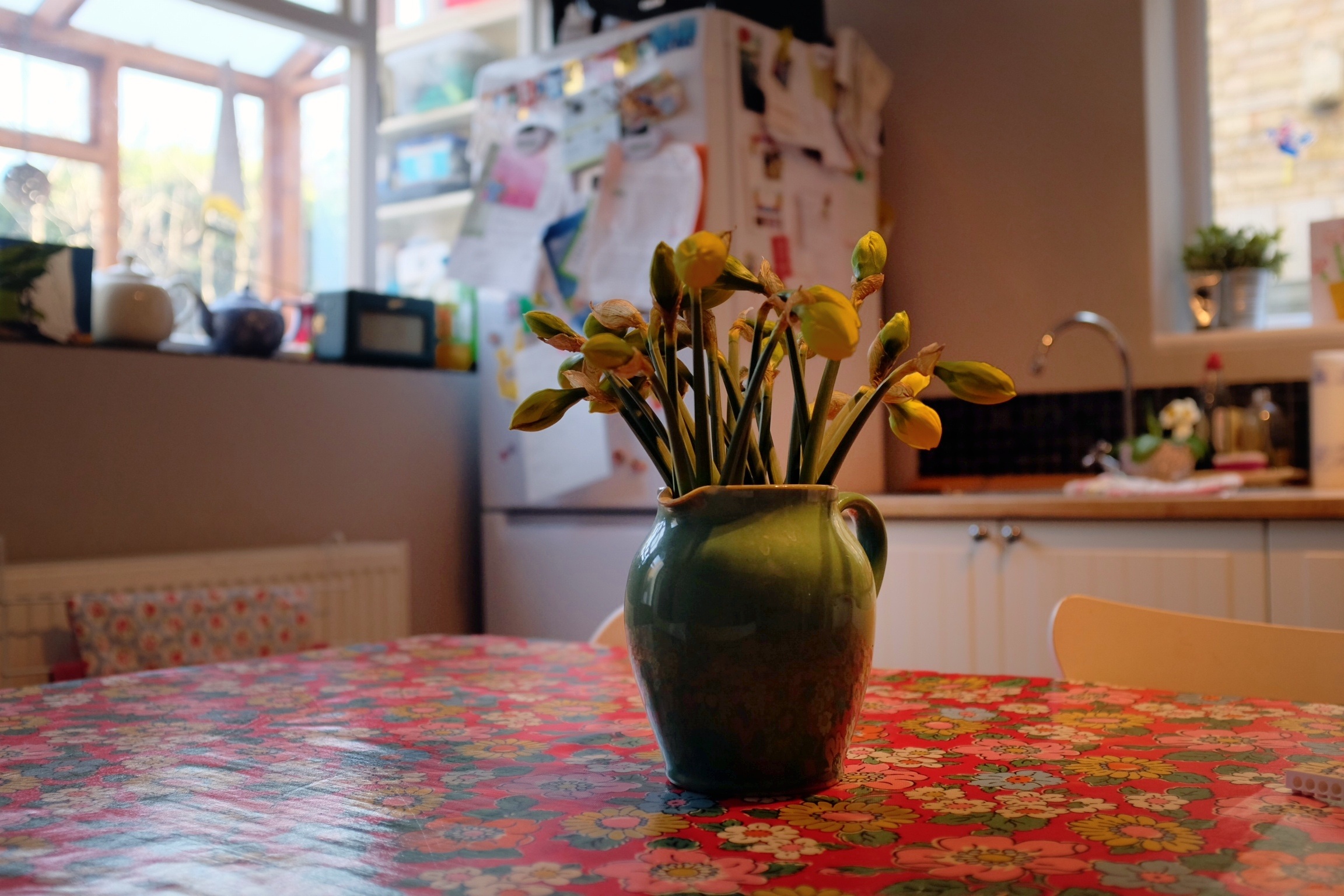 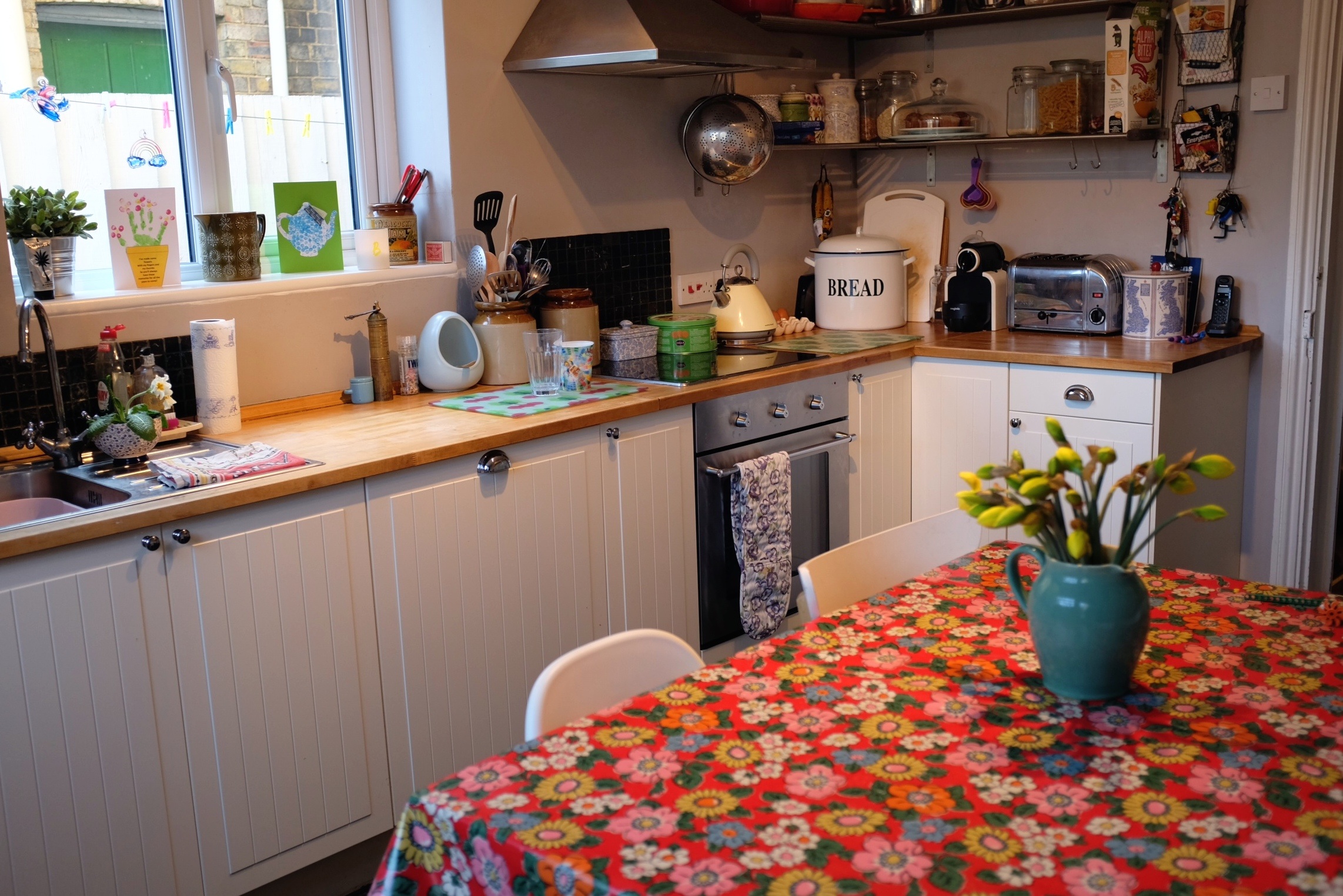 In the background you can see the black mosaic tile splashback by the hob. We also have another by the sink. I really, really hate these tiles and would love to replace them with white metro tiles. But, there are some things you just have to live with – especially as removing these ones would almost certainly rip half the plaster off the wall. The previous owners had the same tiles in the bathroom too. Hideous! Those ones went in a skip long ago, thank goodness. 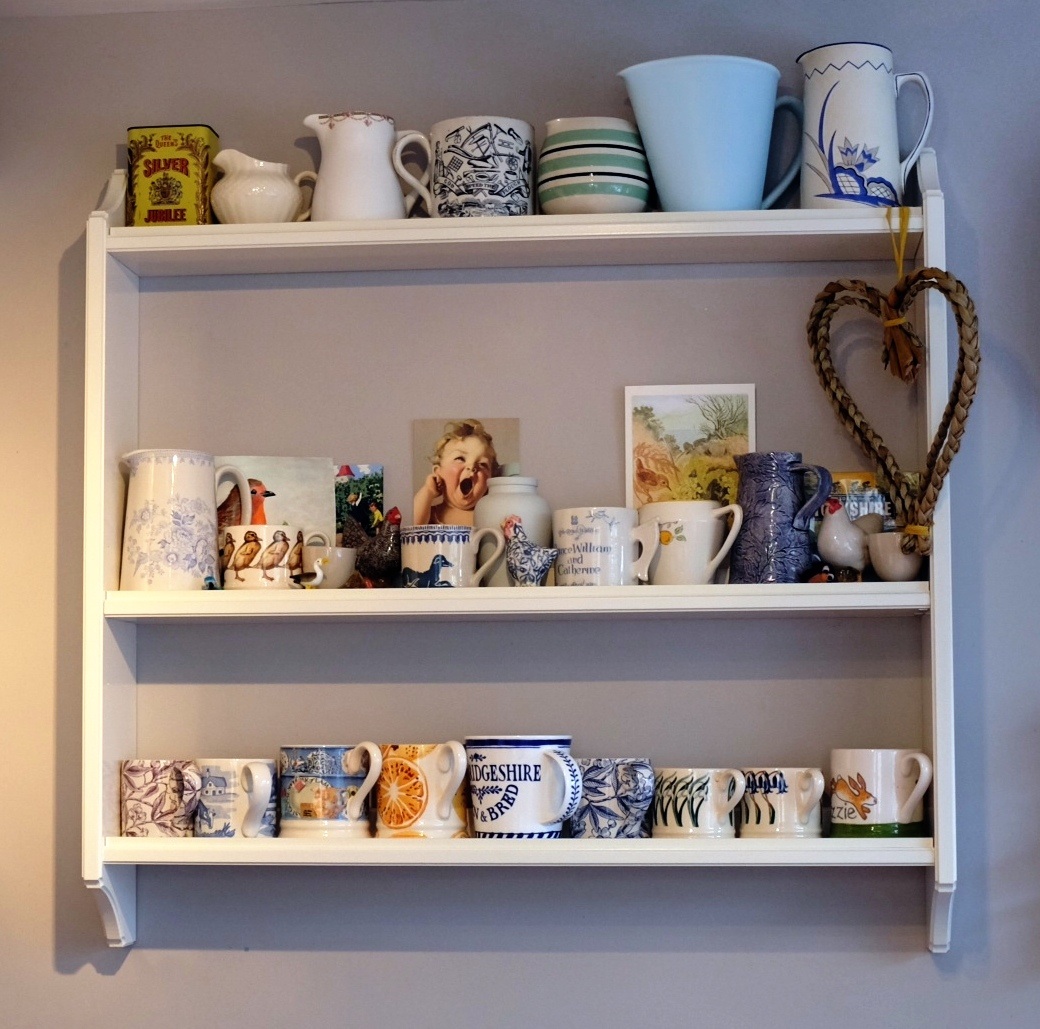 Do you think it’s better to try and work with what you’ve got, or is better to rip everything out and start afresh? I’m happy now, but at some points it was hard to feel that we weren’t just throwing good money after bad.

I hope you’ve enjoyed this room tour, I’m hoping to do more of the house when I have time to tidy it!